The Ususal Suspects had once again gathered in the Chicken Shed in Olsvik, this 3rd Monday in February - this time honoured with an important visit from the Great Halls of Power. We must assume that rumours of the grand Garage Nights in Bergen Centre must have spread quickly, since Mr. Deputy Chairman Halvor Asland stopped by to check on the progress of our Great Engine Rebuild. Just like the Premiere last month, we were 8 souls gathered, albeit with a slighly modified cast. We were particularly pleased to see the former Centre Leader, Torbjørn Strandborg, back on his feet and almost completely his old self.

(The text continues below the picture) 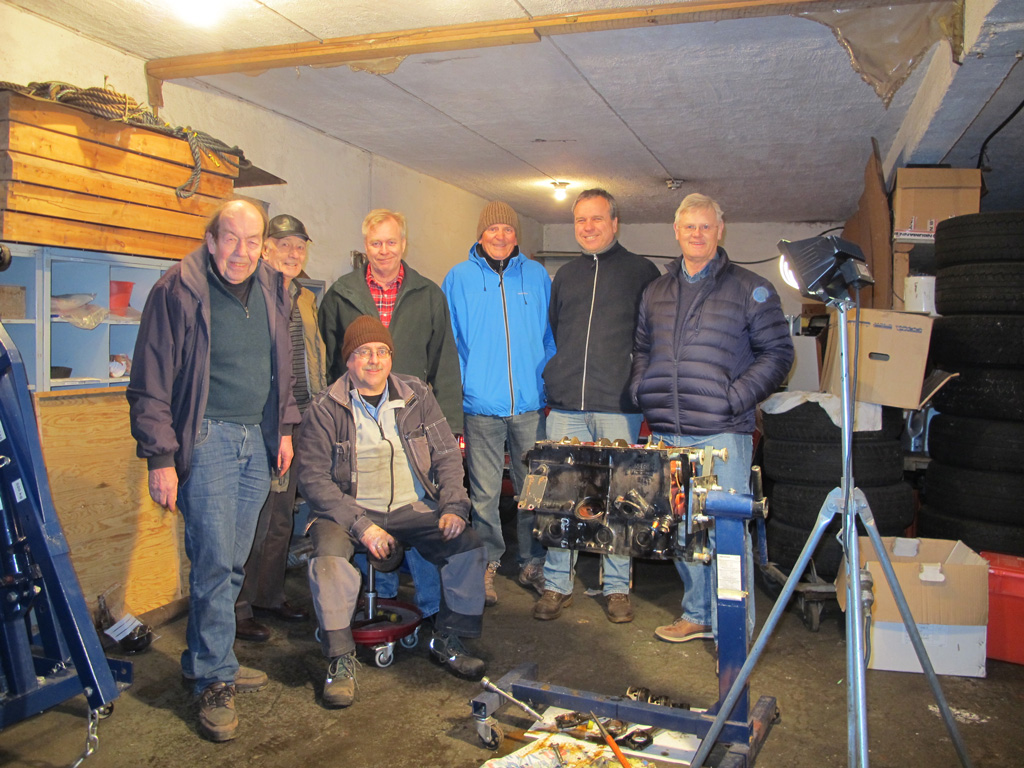 We started the night's proceedings armed to the teeth with 4 UNF 3/8" x 4" bolts, selflessly provided by our club mate Are Wang of Kristiansand, ready for the ultimate challenge - fixing the engine to the engine stand. This turned out to be achievable though not without a substantial dose of fuss. The engine bolt holes were unexpectedly shallow, a fact that required ad hoc production of tube spacers made to exacting measure. However the Centre Engineering Department rose to the occation, thus enabling the bolts to enter properly without touching bottom.

The pictures below presents highlights in the process. (Click on the numbered tabs to flick through the pictures).

Raw footage from the Garage Night here. (Link to YouTube). 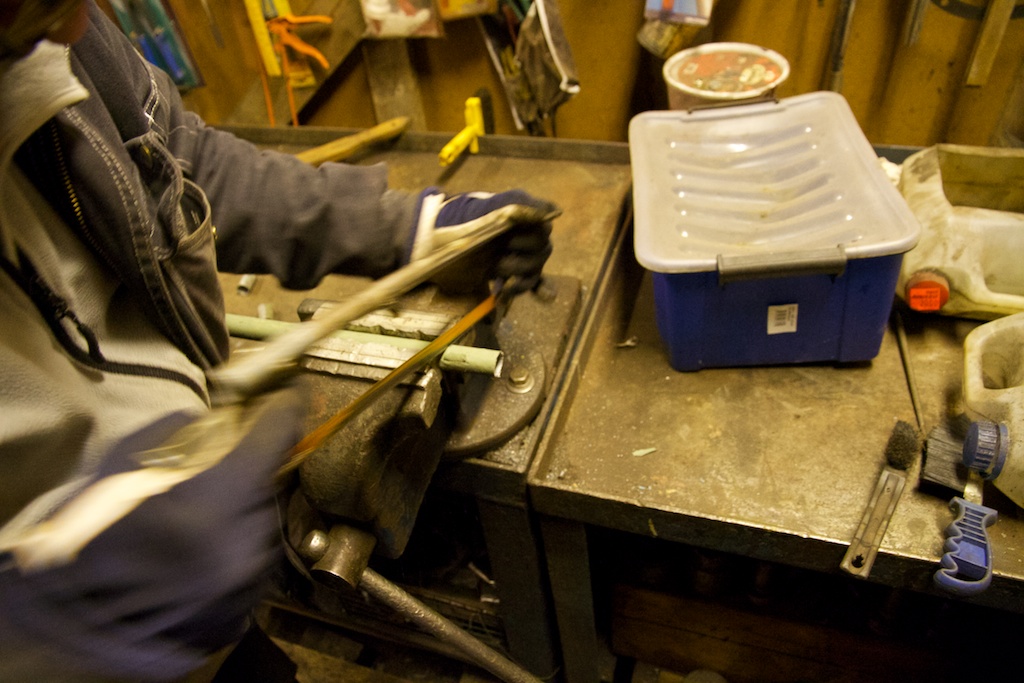 Production of tube spacer for the engine stand 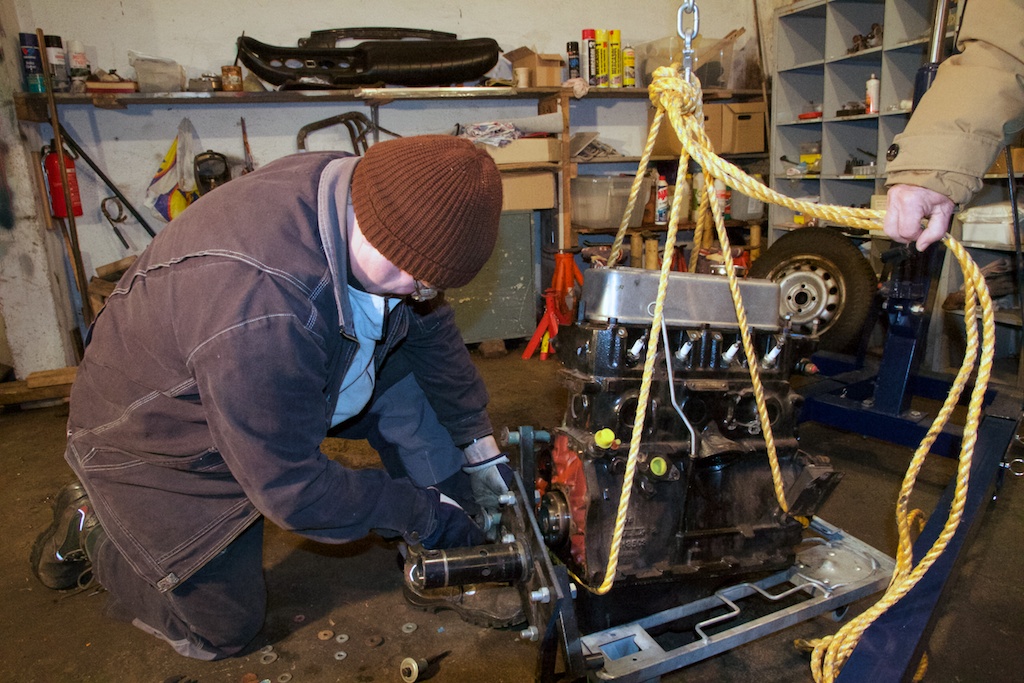 Attaching the engine stand mount bracket to the engine 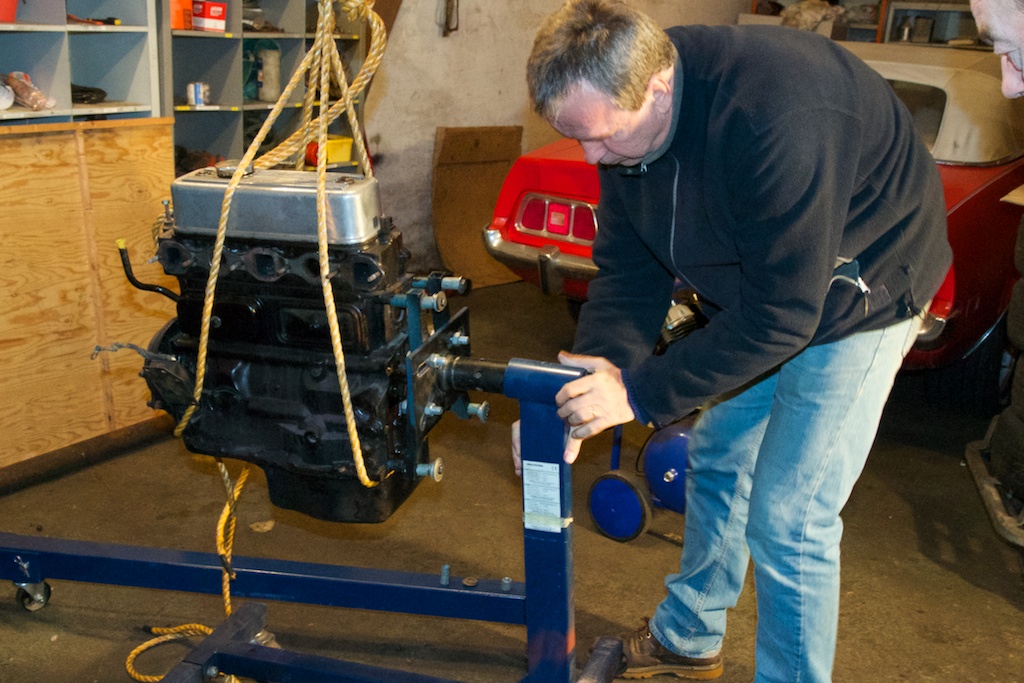 Mark joins the engine with the stand. 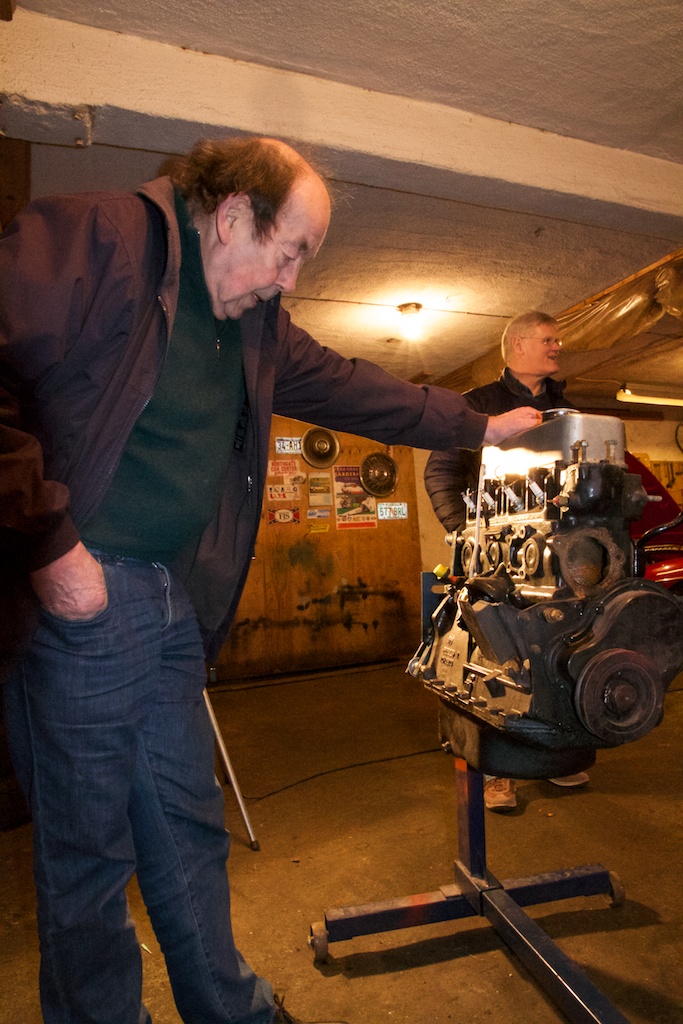 Truls dreaming of the old days, when he ate contraptions like this for breakfast. 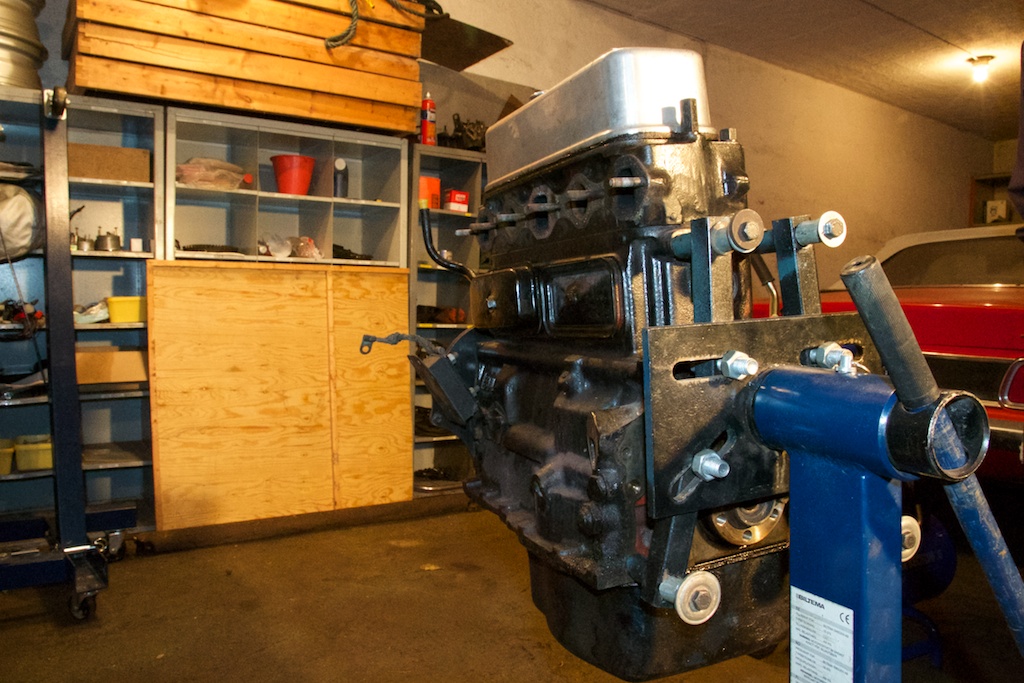 Voila - as if it has been there always, the engine is in the engine stand, perfectly balanced and ready to be gutted. 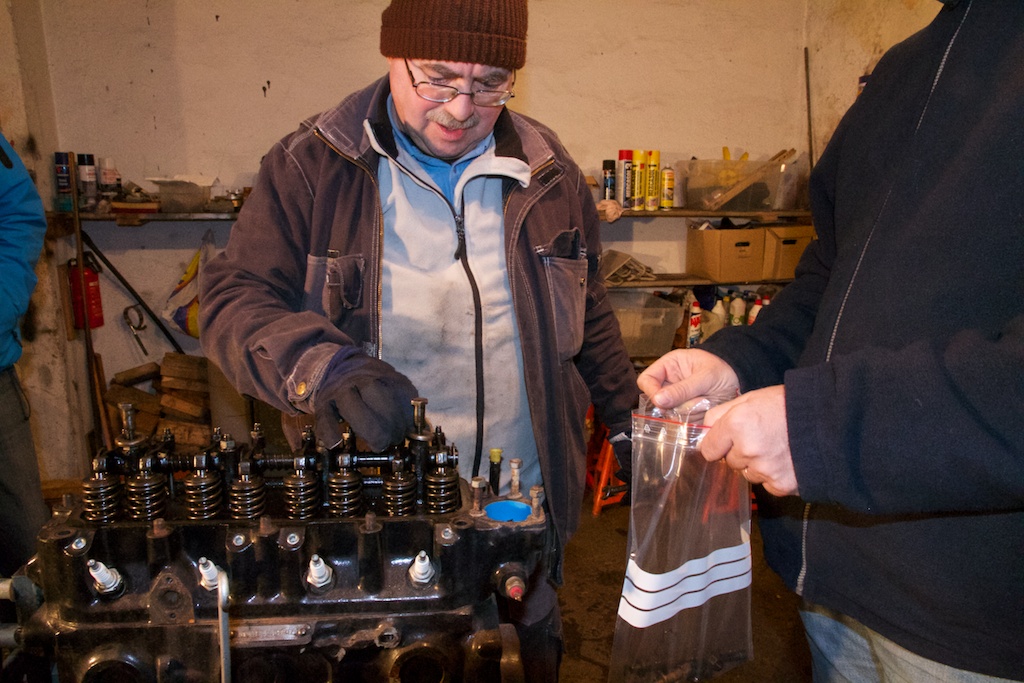 Dismantling the studs from the cylinder top. Most of them came out easily but of course, a few let go of the nut in stead and remained stubbornly fixed to the top. 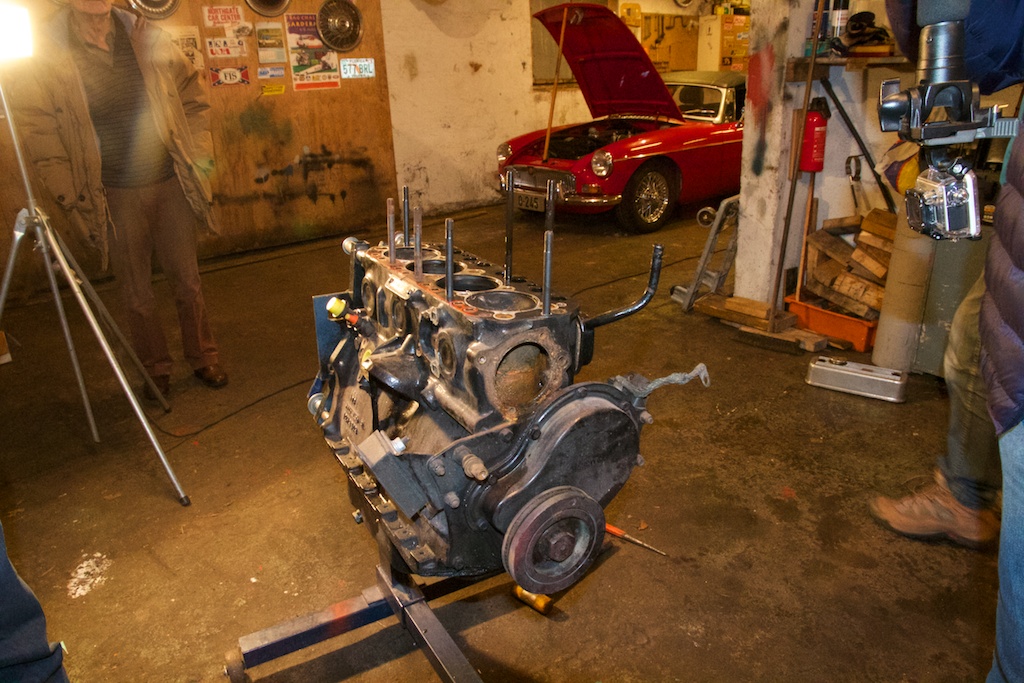 Most of the remaining studs let go after some persuation with a pair of nuts, but of course, a few just wouldn't move. We hope they will let go next time, after marinading in 5-56 for 4 weeks. 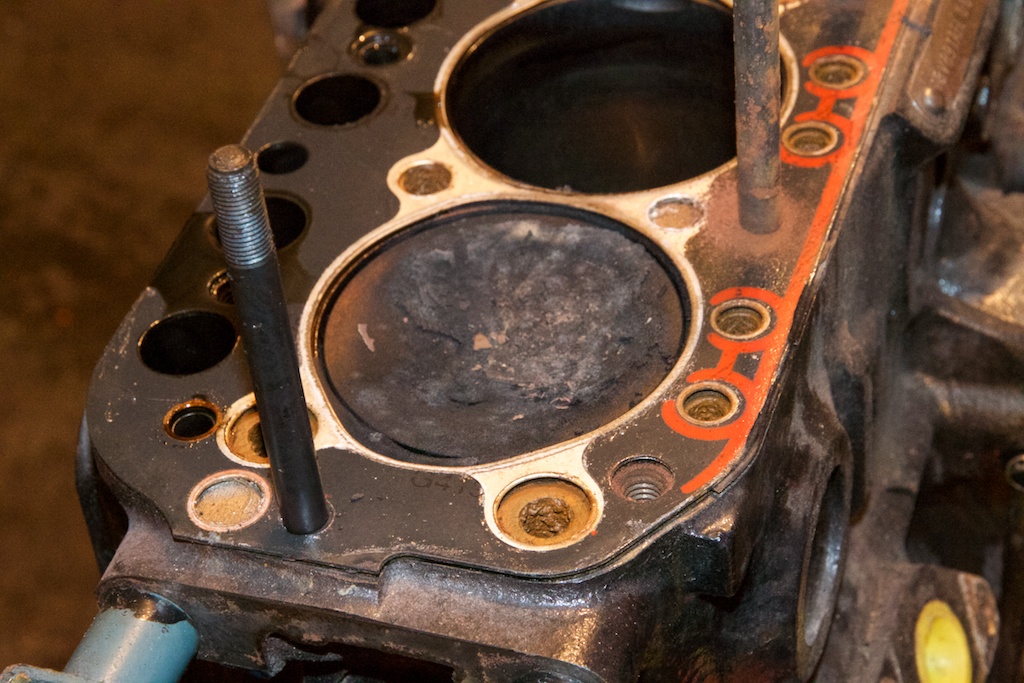 This is why the engine needed a rebuild. Cylinders 1 and 4 with evidence of more than just petrol taking part in the combustion. 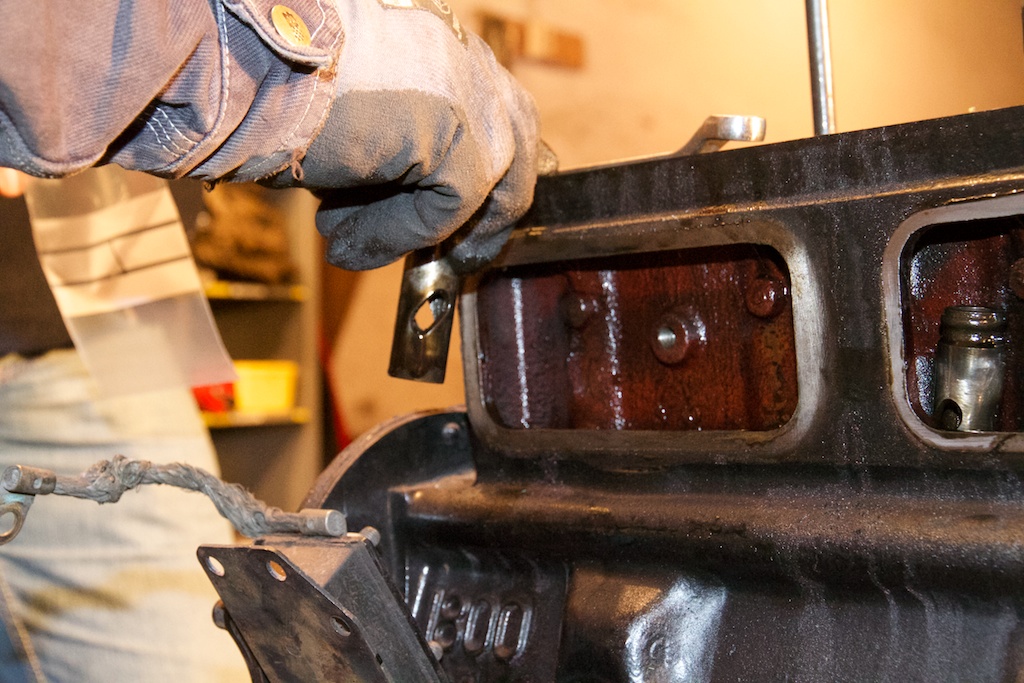 The valve lifters. It only took a moderate amount of fumbling to escort all of them out and into eight numbered zip-locks. 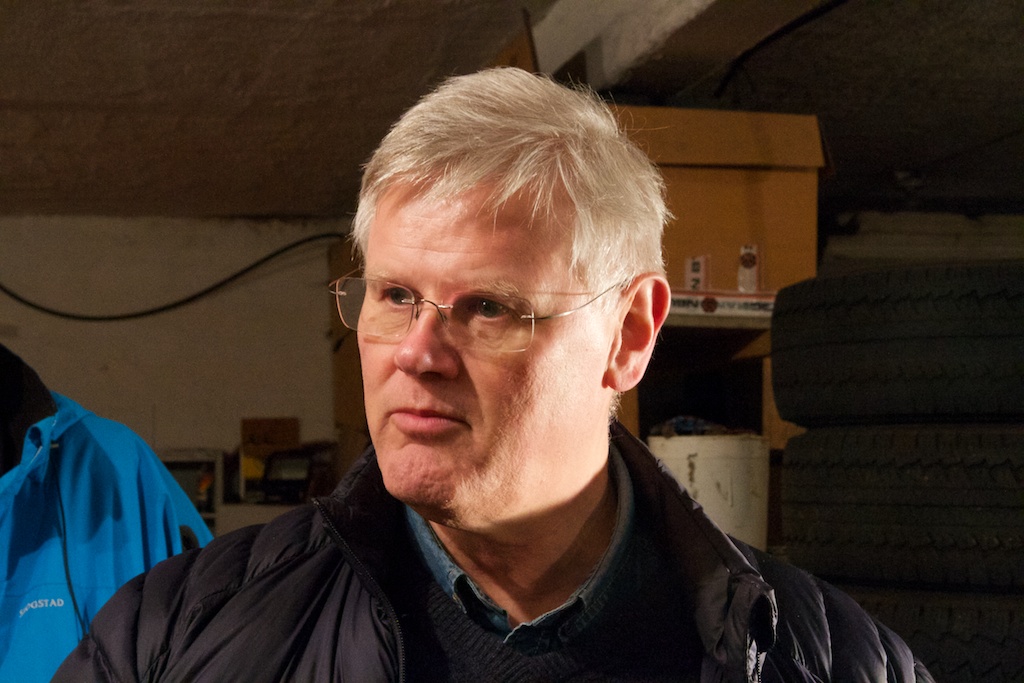 The previously mentioned Important Visitor frem the Great Halls of Power. People say that one picture speaks more than 1000 words, but we can assure that he was friendly and well mannered all night. 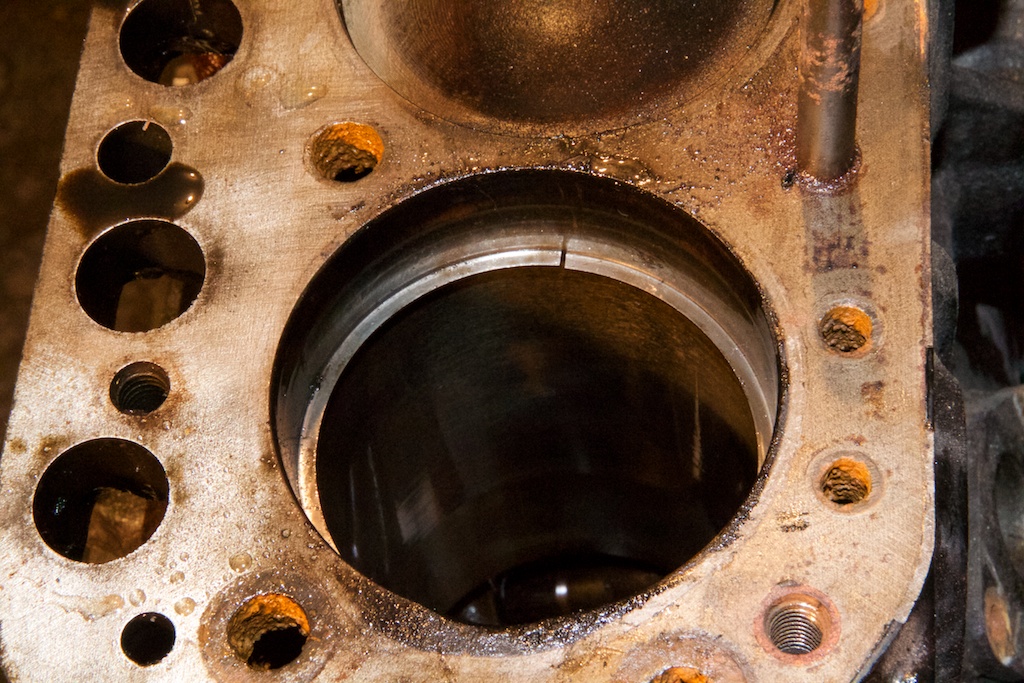 The piston of cylinder 4 is out and we measure the gap in the piston ring to help estimate wear and tear. The gap was exactly 1.0 mm. WAY too much according to the many experts present. In addition, the ring had a distinct and very visible shoulder on the side. This author's all but expert eye estimated that at least 30-40% of the steel was missing. 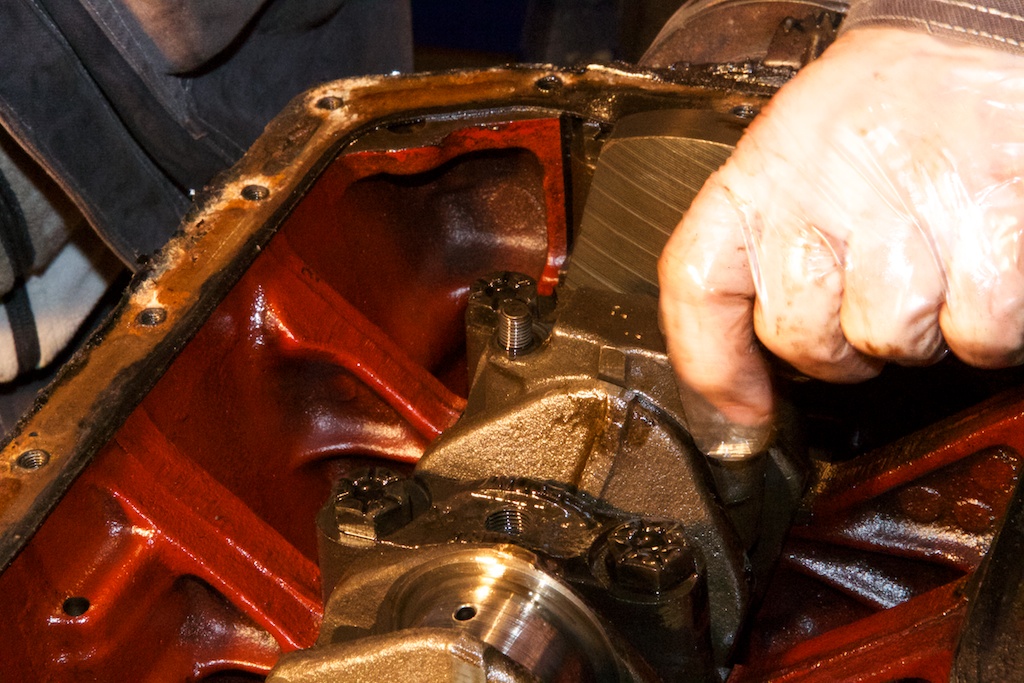 On to the crankshaft bearings. It turned out the shaft showed signs of at least some wear. In order to decide if professional grinding is required, we need to measure the bearings for ovality. This is job number one next time. 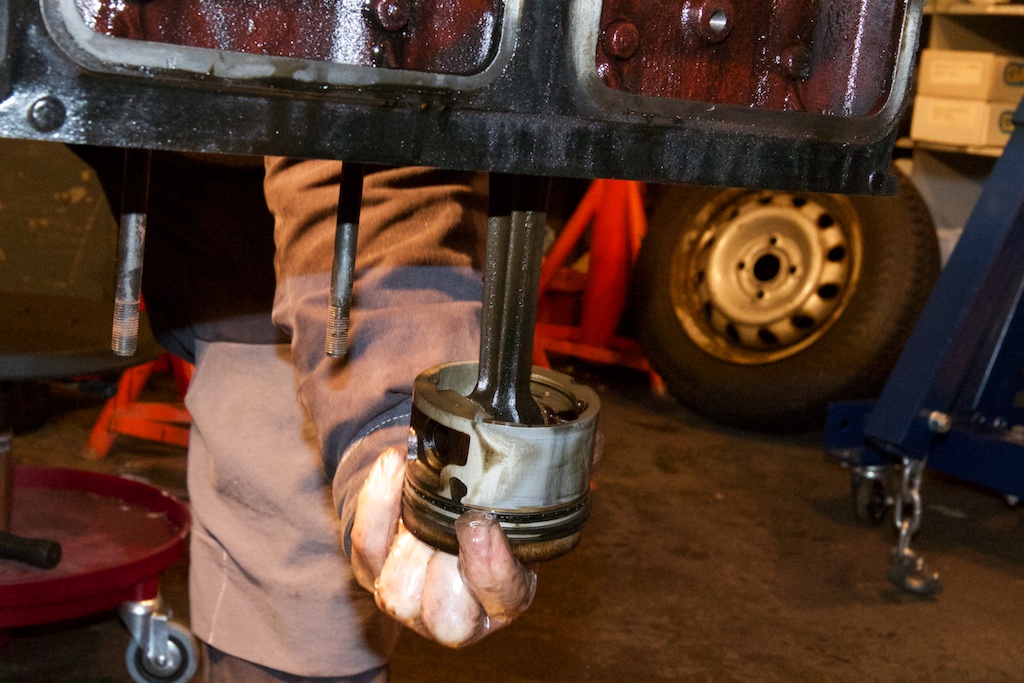 Pistons coming out. Once again cylinders 1 and 4 behaved suspiciously. Number one and four slipped out with next to no friction at all. The two centre cylinders offered much more resistance. 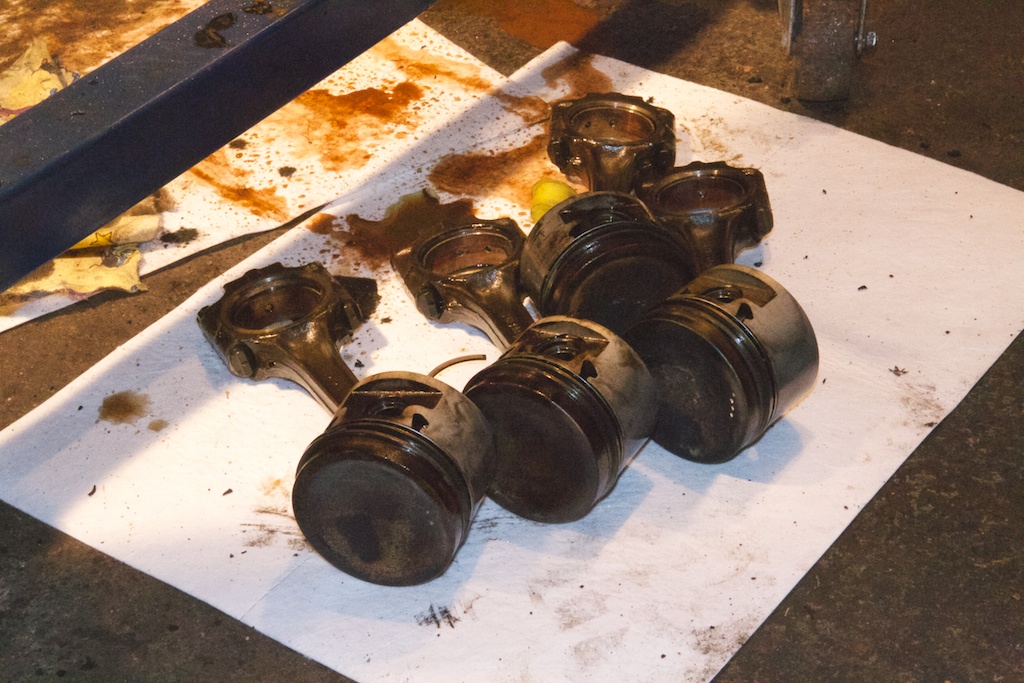 And here is the night's catch. You should have seen the one that got away. That was a big ugly bastard. 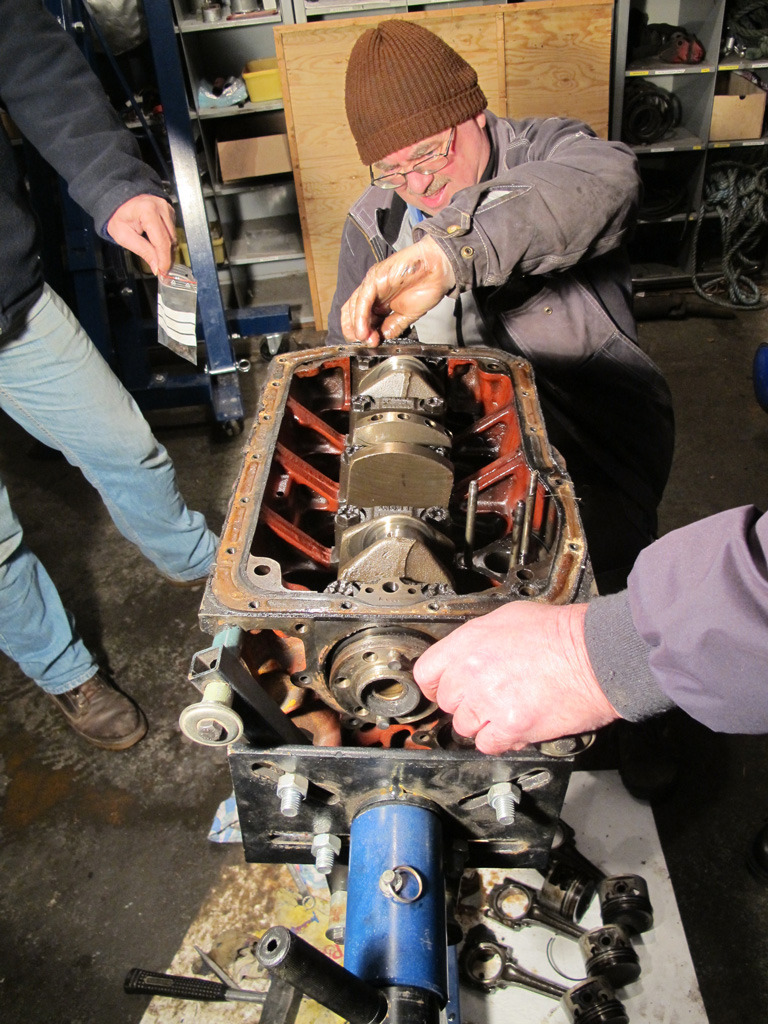 Atle works on the timing chain and disk. Despite being an 18V it has a double timing chain. We assumed this was an aftermarket addition, but Truls suggested it could be the factory clearing out old stock. If it is a very early 18V this has some logic to it, we suppose. (Photo: Halvor Asland) 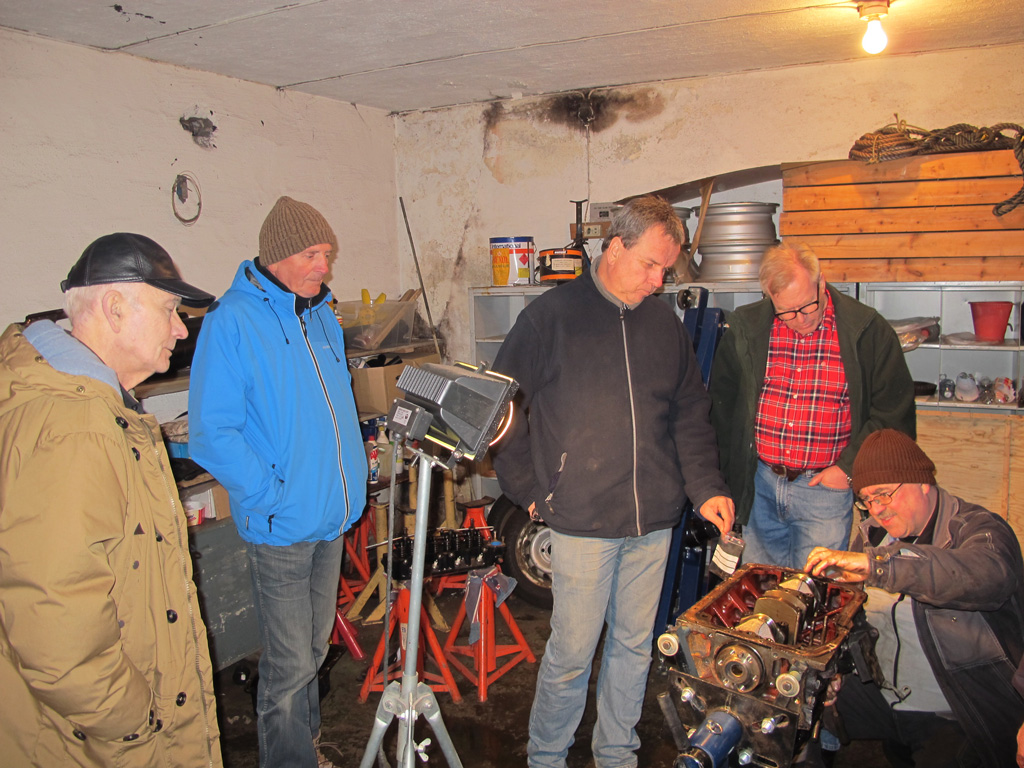 The ratio of worker to innocent bystander is acceptable but not outstanding. One wrench operator, one bag holder and one pompous advisor (the author), compared to only two people in the audience.  (Foto: Halvor Asland)